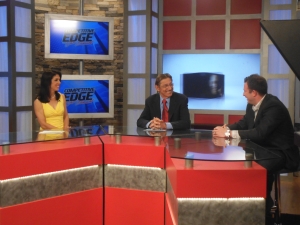 During the taping of the show, hosts Kristy Villa and Joe Namath share a lighthearted moment with  their guest, Appsbar President  Michael Richmond.

Their Competitive Edge:  Leveling the playing field for businesses, regardless of their size, to develop cross-platform mobile applications

Okay, here’s an exercise:  Picture in your mind your average mobile app developer.  What are you seeing?  A slovenly, hygienically-challenged 30-something sitting in a dark room surrounded by empty chip bags and crushed energy drink cans?  A college kid sitting in his dorm room with his buddies working on the next big social networking startup?   A 7-year-old genius who can’t stay up and code past her bedtime?  Yes, these stereotypes do exist, but you can now also include a PTA mom, a garage band, a henna tattoo artist, even legendary boxing promoter Don King – all thanks to an online tool that allows everyday people with zero coding experience to develop their own cross-platform mobile app – for free.

Created by DigDev Co-Founder Scott Hirsch, Appsbar  provides business owners with an alternative to costly in-house or outsourced app development teams, through its user-friendly interface that lets even the greenest newbies create customized apps. In the beginning, Appsbar was approached by companies who would pay them as much as $100,000 to develop proprietary apps.  Of course, not every company has a hundred grand lying around that they can spend on upgrading their technology.  In his recent appearance on TCE, Appsbar President and CEO Michael Richmond explained, “We think (there are) 10 – 15 million small-to-medium-sized businesses without the ability to have an app for their brand.  Hence, Appsbar was born.”

Since the tool launched in April of 2011, over 300,000 users have signed up on Appsbar to develop their own mobile apps.  Appsbar is responsible for over 30,000 apps currently in major app markets.  While full-time developers might look down their noses at us common folk for applauding this concept, there are tons of businesses who appreciate the affordability (it’s free to create and publish your app) and the convenience of being able to create a custom app that gets their name out there and expands their client base.  And the tech community at large has taken notice.  Last year, Appsbar won a People’s Choice Stevie® Award for Favorite Media/Entertainment Product or Service.  According to Richmond, investors have begun to take notice as well.  “The app market is in the infancy stages of technology, so to speak.  Apps are where websites were 10 – 15 years ago, so (the investors) recognize that, with only a million and a half apps in iTunes and Google Play, we haven’t even scratched the surface.”

The Competitive Edge with Joe Namath

The Competitive Edge with Joe Namath